In 2018, about 54,000 patients had a total of 68,724 in vitro fertilisation (IVF) and 5,651 donor insemination (DI) treatments in licensed fertility clinics across the UK1 – this report looks at how access to, and outcomes of fertility treatment, differed by ethnic group.

Ethnic comparisons are limited by the data we hold on our Register and there are a number of external factors that contribute to the differences we outline in this report, such as socioeconomic status, which is shown to impact rates of pre-existing health conditions.

Where possible we have added in broad interpretations of why disparities may exist and have included references to peer-reviewed academic or other publications that provide further information.

Five aggregated ethnic categories have been used throughout this report (Asian, Black, Mixed, Other and White – as used in the 2011 Census of England and Wales2) to allow for more reliable comparisons across ethnicities. These are broad categories and encompass a wide range of ethnicities. However, differences may exist within the major categories and some data is available on more specific ethnic categories in the underlying dataset. Where the numbers in a single year are too small for robust estimates by ethnicity, we have aggregated the data by up to five years.

In the concluding section, we have outlined a number actions we will take to address the issues raised in the report.

The reasons for these variations are not certain but may relate to several factors, including socioeconomic related pre-existing health conditions such as obesity. Obesity impairs ovarian response to stimulation drugs, ultimately resulting in fewer mature follicles5. Endometrial receptivity may also vary by ethnicity, and fibroids are three times more common in the Black population and are associated with reduced IVF success6. 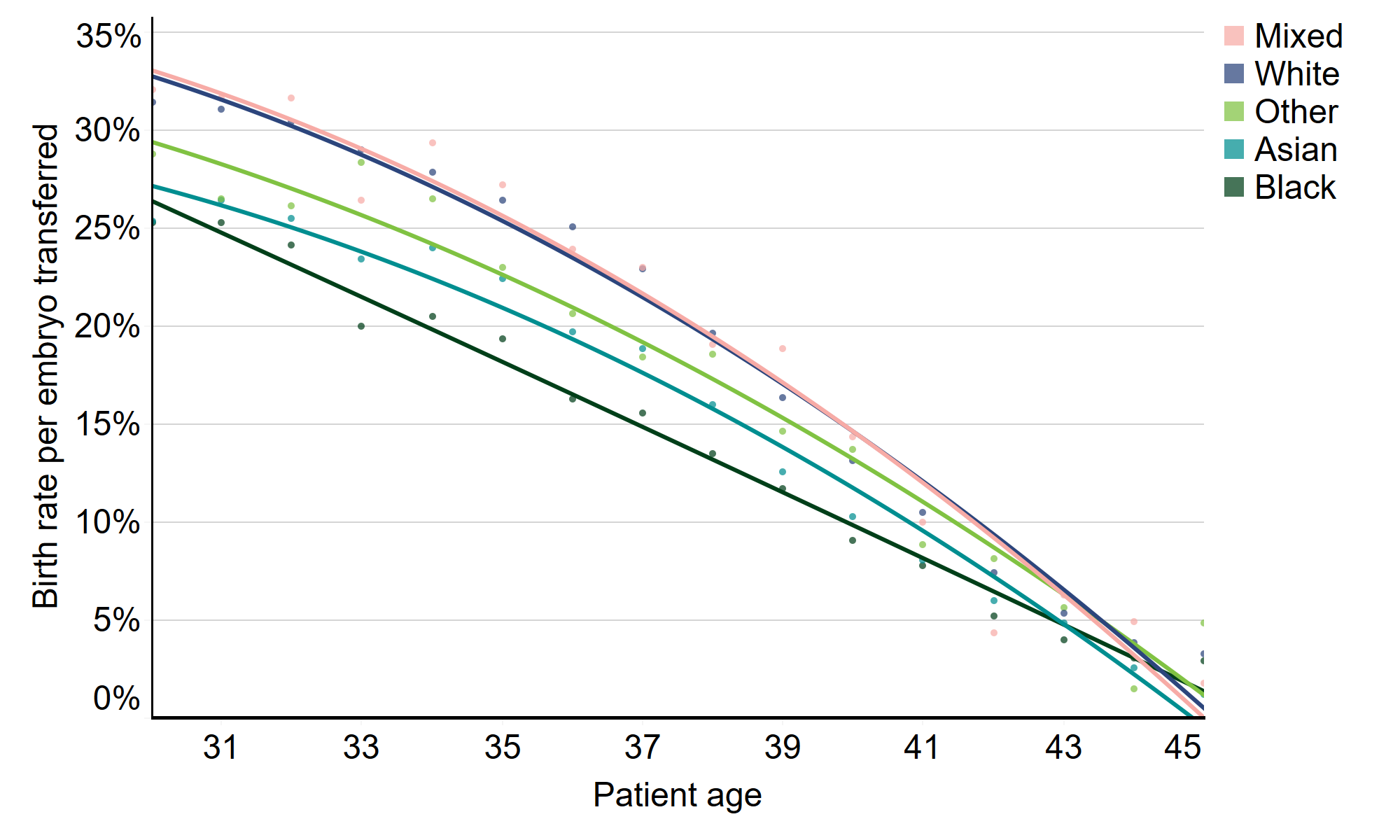 Note figure 1: This data excludes cycles using donor eggs, PGD, PGT-A, or surrogacy, and cycles where a pregnancy was recorded but not the outcome. Lines included in the graph are lines of best fit and circles represent the average birth rate at individual patient ages.

Proportion of patient-based infertility by ethnicity, 2014-2018 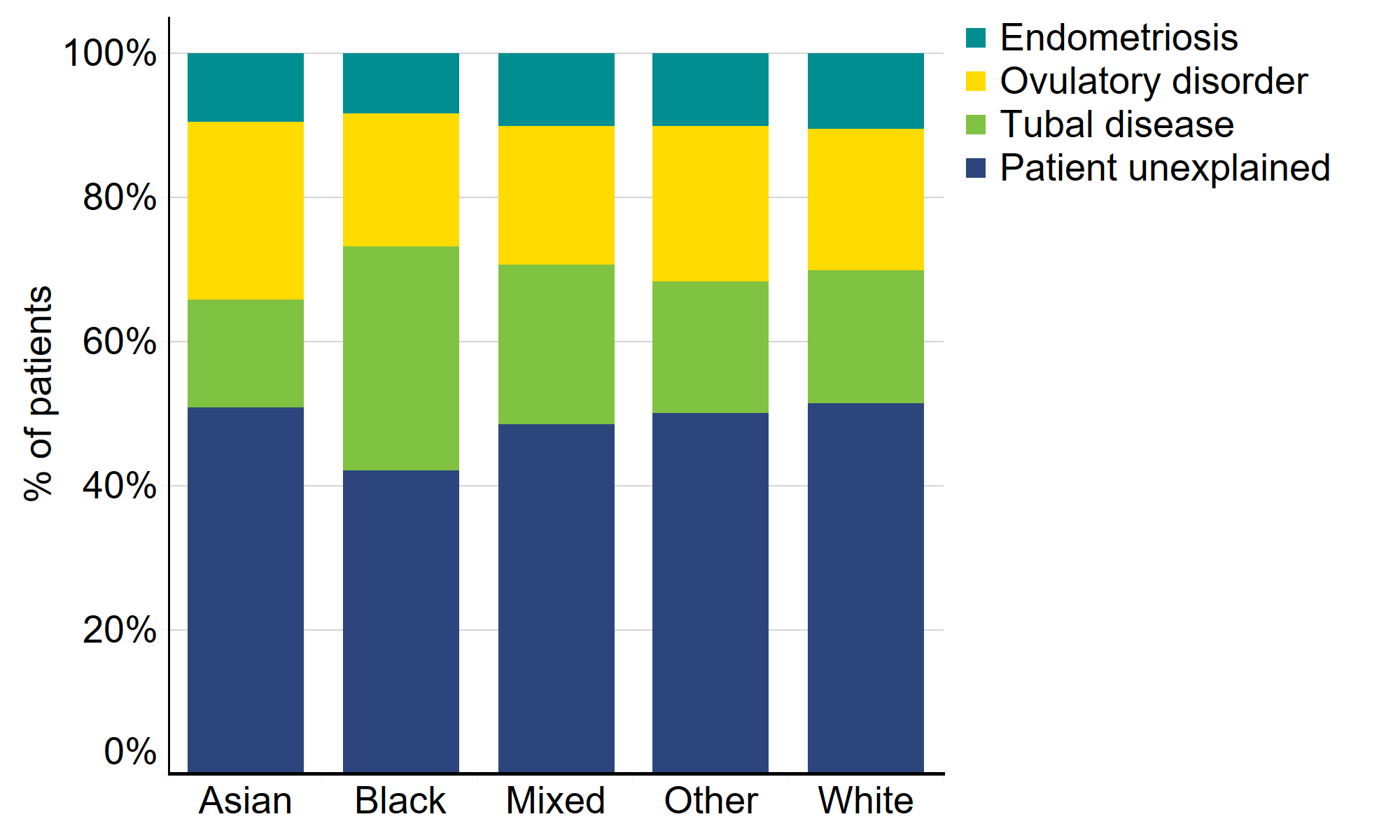 Note figure 2: Male infertility is similar across patient ethnic groups, therefore only patient-based infertility is included in the above figure for simplicity. Cycles with no recorded infertility, PGD, PGT-A and surrogacy cycles were excluded.

Multiple births are the single biggest health risk of fertility treatment for both patients and babies. Patients having a multiple birth are at an increased risk of miscarriage, high blood pressure, pre-eclampsia, gestational diabetes, caesarean section and the risk of maternal mortality is increased by 2.5 times. Multiple births also increase the risk of premature birth by six times, which can lead to long-term health problems such as difficulty breathing, cerebral palsy and other physical and learning difficulties10-12.

Maternal mortality rates are low in the UK (9.2 in 100,000 pregnancies) but Black women are at a five times greater risk than White women of dying during pregnancy. While advanced age and pre-existing heart conditions are major factors in mortality risk, multiple pregnancies were directly or indirectly related to nine of the 209 maternal deaths from 2015-201713. The higher age of Black IVF patients (section 7) and the higher prevalence of heart conditions in the Black population14, mean that it is particularly important that risks should be seriously considered prior to using multiple embryo transfers. 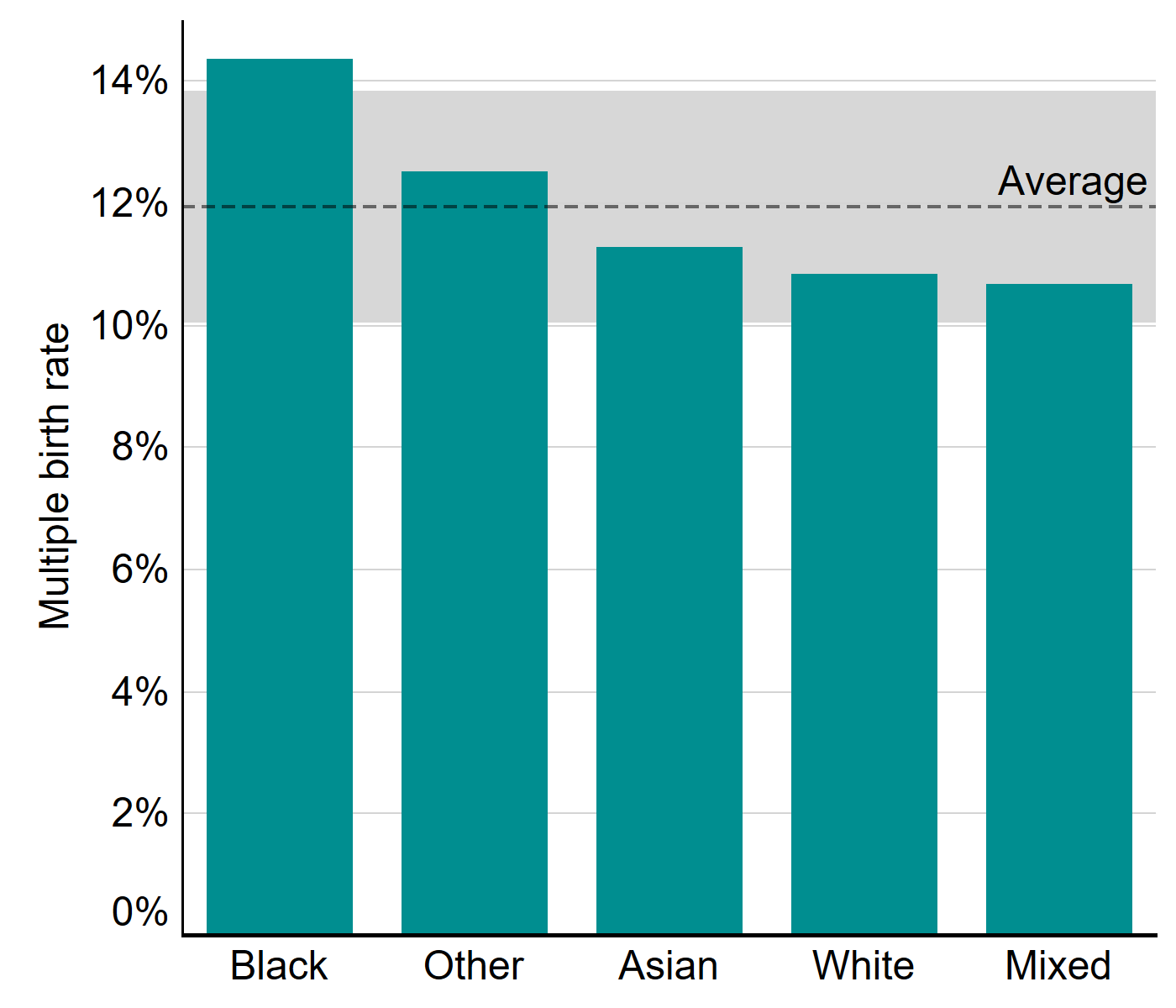 Note figure 3: cycles where a pregnancy was recorded but not the outcome have been excluded. Average multiple birth rate (dashed line) only includes cycles with listed ethnicity. Grey shading represents 95% confidence interval.

Note figure 4: This data excludes cycles where a pregnancy was recorded but not the outcome.

3. White egg donors most commonly used across all ethnic groups

Use of donor eggs and sperm has increased in recent years and was used in 12% of all IVF cycles in 201816. From 2014-18, the proportion of all fertility cycles using donor sperm or eggs varied by ethnic group: Asian 8%, Other 10%, Black 17%, Mixed 20%, and White 22%. These differences relate in part to cultural and/or religious beliefs and stigma around donation, particularly in South Asian communities, where the use of donor eggs or sperm can be a particularly sensitive issue17.

In IVF cycles using donor sperm, most donor ethnicities matched that of the partner ethnicity from 2014-2018 (Table 1). In IVF cycles using donor sperm, 96% of cycles with a White partner used a White donor. There were also high rates of donor ethnicity matching with Asian (67%) and Black (65%) partners. In contrast, in cycles where the partner identified as Other or Mixed, White sperm donors were used by 74% and 48% of patients respectively.

Table 2. White egg donors were the most commonly used across ethnic groups

Donor eggs and sperm may be imported to the UK to access donors matching specific criteria such as ethnicity. About 44% of all sperm donations were imported in 2014-2018, whereas only 3% of egg donations were imported. Donations from Mixed (76%), Other (64%) and Black (63%) sperm donors were more likely to be imported from 2014-2018 (Figure 5). In contrast, White and Asian sperm donors were most commonly registered in the UK, with only 43% and 32% respectively of sperm donations imported from outside the UK.

Egg donors were mostly registered in the UK from 2014-2018, with egg donations from donors of Other ethnicities most likely to be imported at 10%, followed by Black donors at 5%.

Proportion of sperm and egg donors imported to the UK by ethnicity, 2014-2018

For DI, the proportions of patients by ethnicity in 2018 were: White (92%), followed by Asian (3%), Black (2%), Mixed (2%) and Other (1%). The variation between the UK population and DI patients was mainly underrepresentation in Asian (3% DI, 7% UK) patients. This may be due in part to fewer Asian patients having treatment with a female partner than other ethnic groups – see section 8. See section 3 and section 4 for information on donor use and availability by ethnicity.

Note table 4: UK population estimate is calculated using 2011 census data for Scotland and Northern Ireland and ONS 2019 estimate data based on the 2011 census for England and Wales18-20. Patient’s acting as surrogates have been excluded from this table.

These differences likely relate to regional funding availability and eligibility criteria set by the devolved governments and Clinical Commissioning Groups in England. Availability of IVF funding can range from no funding to three funded cycles depending on location and eligibility restrictions applied22. 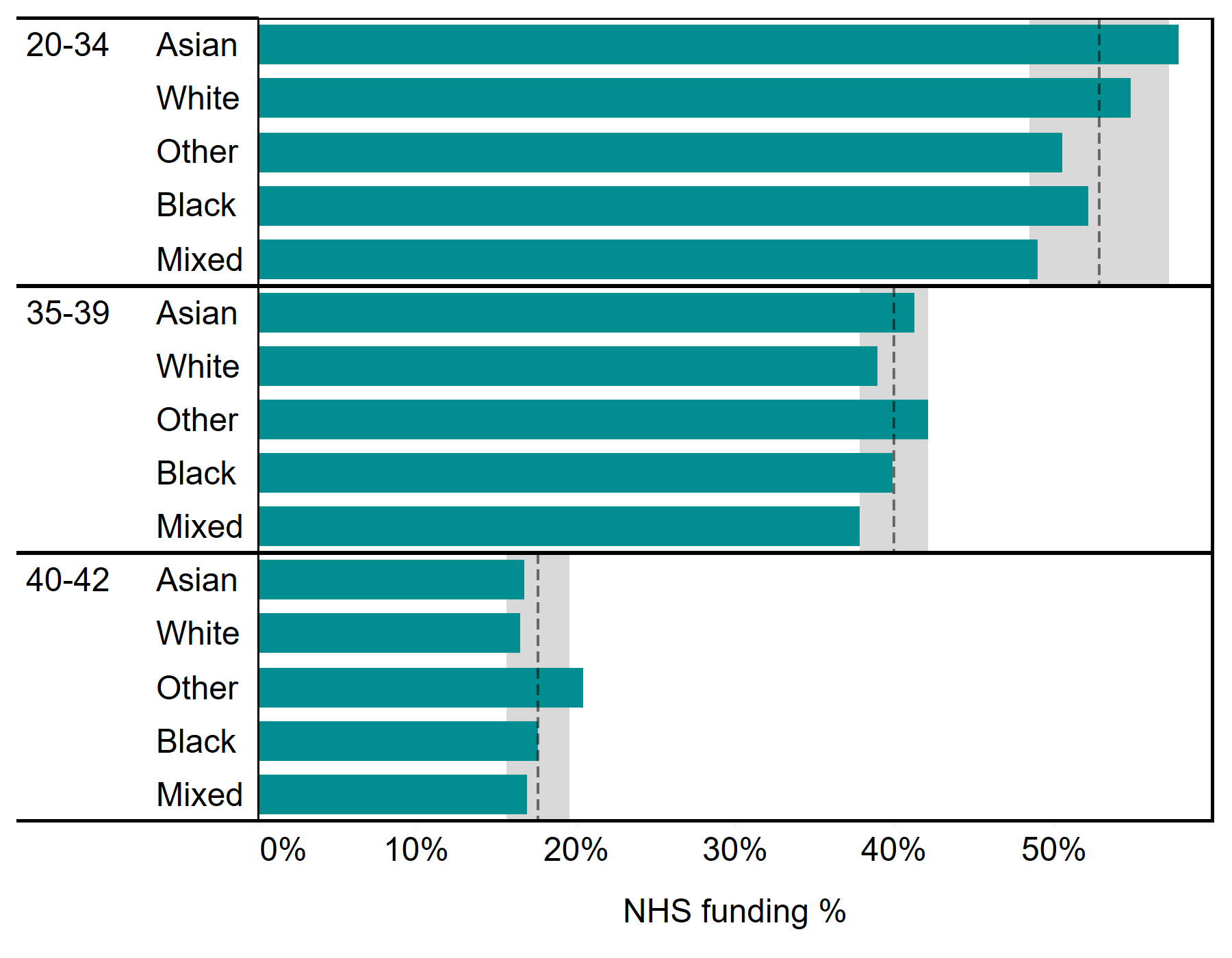 Note figure 6: Ages above 42 have been excluded in this figure due to reduced patient numbers which make it difficult to draw comparisons. Age groupings used in figure are based on funding criteria set by Clinical Commissioning Groups and devolved governments. Grey shading represents 95% confidence interval and dashed line represents average within each patient age group.

The average age at which patients started IVF treatment in 2018 was 34.6, but this varied by ethnicity. Patients of Mixed, Other and White ethnic groups have commonly started IVF around 34-35 years of age and this has remained fairly consistent from 2009-2018 (Figure 7).

The average age of patients at their first IVF cycle has increased in recent years for Black patients from 35.1 in 2015 to above 36.4 in 2018. Research has suggested treatment costs as a major factor in treatment delays7, which may indicate cost-related changes since 2015 in areas with higher proportions of Black residents, such as changes to NHS funding.

Figure 7. The average age of a Black patient starting IVF has increased in recent years 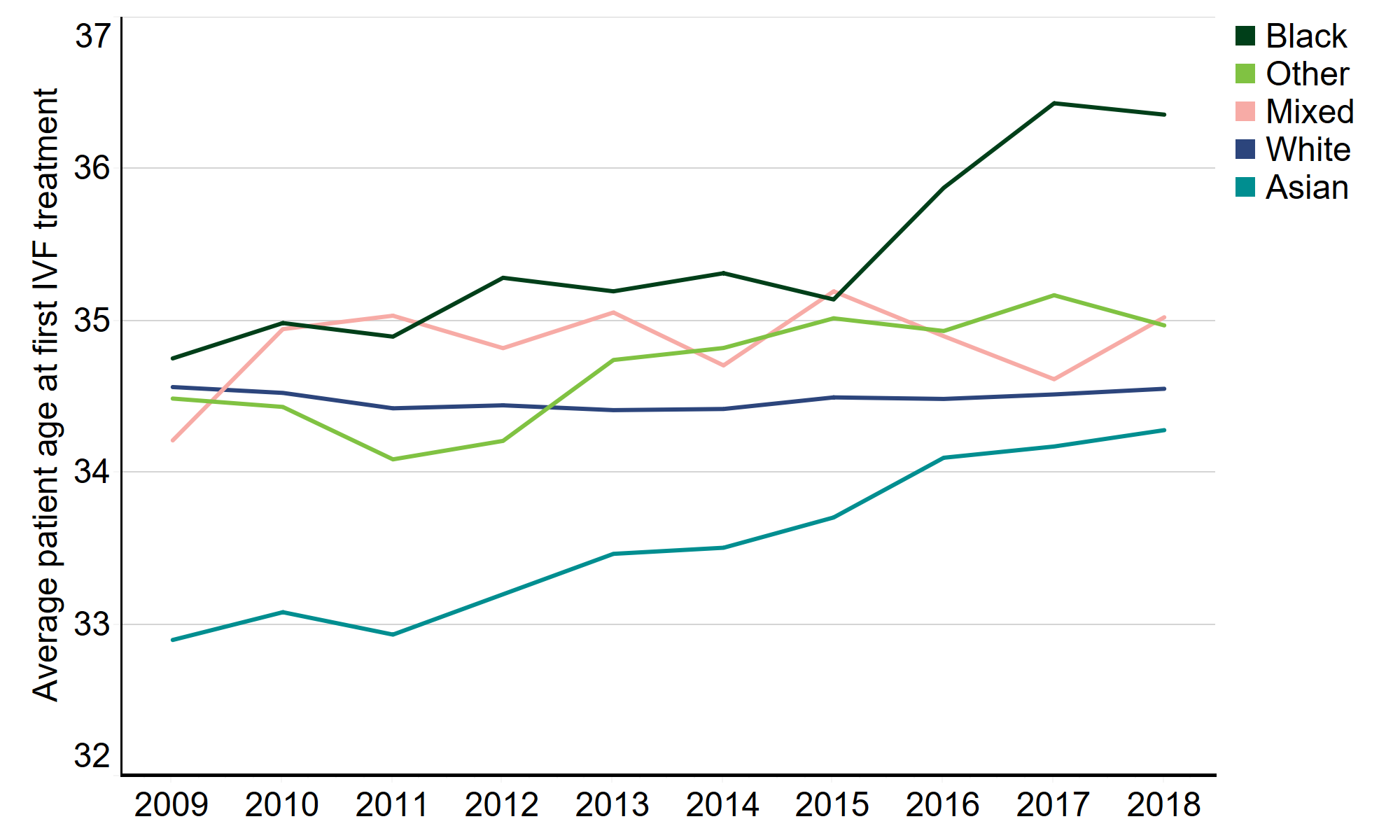 Asian patients more commonly had a male partner for both IVF and DI treatment than other ethnic groups (99% of IVF treatments, 67% of DI treatments), followed closely by patients of Other ethnicities (99% IVF, 63% DI).

Table 5. Female same-sex relationships were more common among patients of White or Mixed ethnicities than other ethnic groups

Conclusions and next steps

There has been much public discussion in recent years of health inequalities between ethnic communities across the UK. Those inequalities have been highlighted by the COVID-19 pandemic. This report notes several disparities across ethnic groups in fertility treatment. While we do not have definitive explanations for why these differences exist, we are committed to using the data we collect and feedback from our licensed clinics and patients, to understand any inequalities in access and outcomes in fertility treatment in the UK, and take action where needed. Although this report does not look directly at discrimination, there is evidence that this is widespread in other aspects of UK life, including within the health sector, and we will act in this context.

In the short term, we will do the following:

Actions for the HFEA

The information that we publish is a snapshot of data provided to us by licensed clinics. The figures supplied in this report are from our data warehouse containing Register data as at 07/01/2020. We have excluded approximately 850 cycles due to technical issues at one centre that resulted in reporting errors. Results are published according to the year in which the cycle was started. Due to rounding, some percentages may not add to 100%.

Ethnic comparisons are limited by the data we hold on our Register. There are a number of external factors that contribute to the differences we outline in this report, which are not collected on the Register such as socioeconomic status, BMI and smoking status.

The way in which ethnicity is recorded on registration forms has changed over time and has been grouped into the five broad ethnicity categories as recorded by the ONS. In 2018, ethnicity was not recorded in the data submitted to the HFEA for about 6,000 IVF cycles and 200 DI cycles accounting for about 12% of recorded patients overall. Patients with no recorded ethnicity have been excluded throughout this report to simplify comparisons across ethnic groups. See the underlying dataset for further information on cases of no recorded ethnicity.

Assisted reproductive technologies are a rapidly evolving field and practices such as number of embryos transferred and NHS funding have changed over this time – these changes are documented in Fertility Trends. For this report, where numbers by ethnicity are small in a single year, we have compiled up to five years of data to provide more robust estimates for comparison.

For further information, please see our quality and methodology report and information page in the underlying dataset.